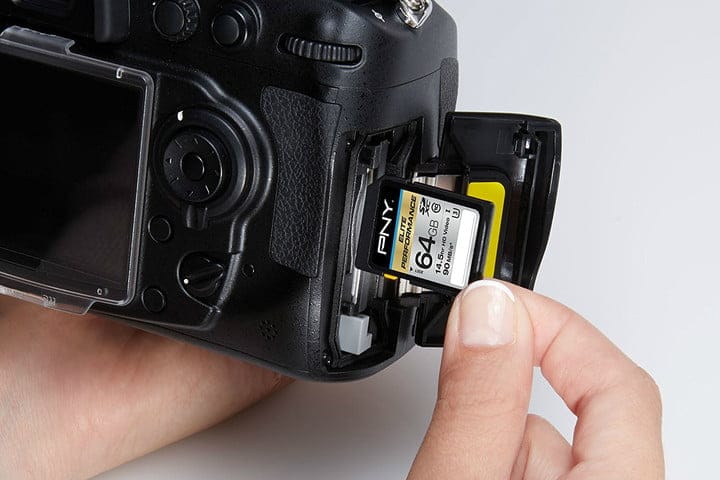 MicroSD cards are becoming more widely adopted, on everything from action cameras to phones to video game consoles. But it’s a good idea not to use one in your dedicated camera, at least not if it doesn’t have a MicroSD card slot.

Why? It’s all about the “sleeve,” the little plastic adapter that comes with a lot of MicroSD cards sold. It’s handy if you need to read the contents of the MicroSD card on a laptop or desktop with no dedicated MicroSD slot, but it isn’t designed for constant use.

Let’s step back a bit. Modern cameras deal with huge amounts of data: 15+ megapixel images, as well as HD and 4K video at 60 frames per second or higher. Full-sized cameras, unlike smartphones, don’t have much in the way of internal storage—they have to write it all to a flash storage card right away. The more images and video you’re taking every second, the faster you need your camera to write data.

That’s why the “performance” of a memory card is so important: those extra labels like “Class 10” and “UHS-3” all deal with the maximum amount of data the card can handle for reading and writing at any given moment. When you buy a speedy and expensive MicroSD card, the card itself can handle that data throughput without any problems, but the same can’t be said for the SD adapter sleeve that came in the package.

The sleeve should technically be able to handle the same speedy data transfer as the tiny card—the electrical contacts are basically just miniature extension cables. And indeed, some of the sleeves that have been tested can score the same on drive speed tests as the unaided MicroSD cards that they’re housing. But when used with a high-performance camera, the extra steps in the writing process slow down the performance.

A practical example: A Sony Alpha A6000 (which we use here at ebs) can shoot six 24-megapixel images per second. At high shutter speeds, it sounds like a little plastic machine gun. But that’s an enormous amount of data, somewhere between 20 and 100 megabytes every second, depending on the contents of the image and the quality setting. When the relatively small memory buffer of the camera’s own hardware runs out, it needs a super-fast SD card to take full advantage of the hardware’s capabilities.

We have a full range of SD Cards available for your DSLR and Mirrorless Camera equipment. After you check the specs of your camera model, check out our inventory for the best prices for your SD Cards. A great option is PNY’s 64GB SDXC Elite Performance SD Card.

There’s nothing wrong with using MicroSD cards in devices that are designed for them. And to be honest, most who use the smaller cards with adapter sleeves won’t notice the difference, or won’t notice often. But if you bought your DSLR or mirrorless camera for fast, reliable performance, you should buy a separate card that’s made specifically for its format—full-sized SD for most models on the market today. They’re quite inexpensive at the moment, and the more reliable performance is worth it.